Skip to content
For 28 years now, loyalty and transparency in our work have always been our objective. We strongly believe in the public interest; therefore, we are fully consumer-oriented and our mission is to provide full access to the cheapest and most environmentally friendly energy, i.e. natural gas. We respect the right of choice and are most anxious that our customers make informed decisions. We adhere to the principles of good commercial practices and accept market rules as an incentive for development.

We have invested over 320 million Euro in the construction of 2,400 km of distribution pipelines. We reached the homes of nearly 250,000 Bulgarian households. Every month we provide an energy alternative to over 60,000 families, over 3,000 manufacturing companies, hundreds of schools, kindergartens, hospitals and social institutions.

Natural gas has always been the most affordable energy for society. Together, more than two decades ago, we started the gasification story of Bulgaria, which with zeal and desire we, Overgas, and you, our friends and partners, will continue to write. Together, we traveled the long and thorny path of changing the status quo and building a functional energy market. Because we have always advocated the right of choice. Because we are on your side. Because we are alike. 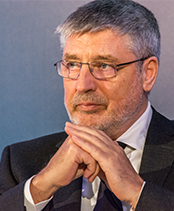 Sasho Donchev
Founder of Overgas
Together with some colleagues, he established Overgas Ltd. in June 1991. In 1992, he founded Overgas Inc. AD and was elected Deputy Chairman of the Management Board and Executive Director of the company.

Under his guidance, the Project for Gasification of Bulgarian Cities was developed and implemented.

He is the author of more than 30 scientific and practical papers and engineering studies, published in Bulgaria, Russia, USA, Germany, Austria, Syria and Libya.

He represents the Bulgarian gas sector in the International Gas Union Board. He was awarded the Honorary Member title, the Gold Sign World Movement Eco Forum for Sustainable Development and the medal Reverend Sergius of Radonezh III-rd degree of the Russian Orthodox Church.

By order of the Minister of Education and Science of the Republic of Bulgaria, Sasho Dontchev was elected a representative of the Ministry in the Board of the Technical University of Sofia.Prior to founding Overgas, between 1978 and 1991, he worked at Gasstroymontaj. He held the positions of Technical Manager, Designer, Specialist in Foreign Trade Department, and Project Leader for “Russia-Turkey Transit Gas Pipeline” Project. Later on, he became the Construction and Installation Director for the construction of Tula-Shostka-Kiev gas pipeline.

Sasho Donchev graduated from the Russian State Oil and Gas University “I. M. Gubkin” majoring in “Construction of gas pipelines, gas storage facilities and oil depots” with honors, as well as from the University of National and World Economy in Sofia, majoring in “Foreign Economic Relations”. He speaks Russian, English and Polish.
© 2023 Overgas | Privacy policy |